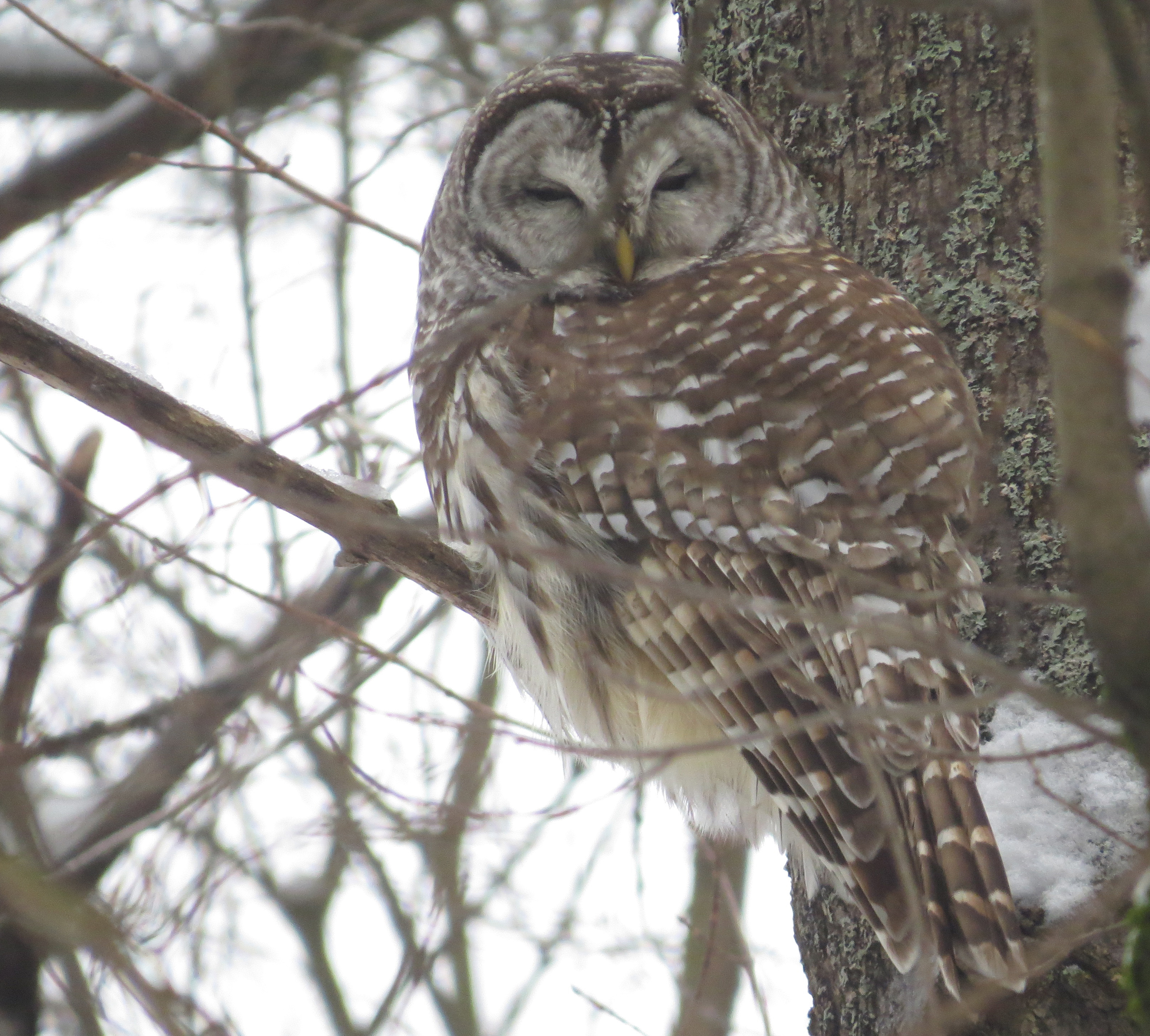 The Christmas Bird Count, which began in 1900, is North America’s longest-running Citizen Science project. Volunteers head out on a single day (between December 14 and January 5), to count the number and variety of species within a 24-km diameter circle. The results are collated and used by naturalists and conservation biologists to study trends in the populations and distributions of birds.

The Val-des Monts count is centred on Lac McGregor, including most of the municipality and the Northeast corner of the municipality of Cantley. Nakkertok North, the Arbraska adventure park and the Blanche river provide nature areas to explore during the count.

For more details or to volunteer as a counter for future Christmas Bird Counts, please contact Amy Lawes: thejasperpatch@gmail.com.

Despite a general feeling that the birds were hiding from us during the official Christmas Bird Count date for Val-des-Monts (January 2, 2022), it turned out that, among the 26 volunteers, we found a good selection of species, and some high counts too. The volunteers covered 257,5kms across the region, and/or observed the birds at their feeders. This is a high count for volunteers for our circle – a very big welcome and thank you to the newcomers to the team, and a special thank you to Deb Doherty for her recruitement efforts also.

In total, 30 species were found on count day, including one new species for the count – a Green Winged Teal, found by Deb Doherty. This takes the total species seen over the 11 years of our count to 50, a landmark!

The following summary includes the results from all 11 counts – this year’s results are in the first column (although we counted in 2022, it is officially the 2021 count season).

Many thanks to all of our volunteers!

The 2020 Val-des-Monts Christmas Bird Count, held January 2, 2021, was our 10th count, and we continue to grow with 23 volunteers participating either out in the field or reporting from their feeders. This year, the weather was kind, a beautiful day to be out with binoculars whether walking, snow-shoeing, skiing, or driving. The snow over the previous night did mean several birders commented on difficulties hearing birds due to the abundant snow-blower use in residential areas.

Despite the noise, 27 species were seen on the day. This included high counts for 10 species, and our first White-Throated Sparrow. A further 4 species were seen in the count week. There was no Golden-crowned Kinglet this year which was unusual, and our usually reliable American Tree Sparrows were only listed as a count week species.

Many thanks to all who participated. Hopefully by next winter, we’ll be able to meet in person for a debrief once again.

The Christmas Bird Count of Val-des-Monts was held on Thursday January 2, 2020. Eleven (11) counters covered a total of 314km – by car, snowshoe, ski and on foot. We also had a number of people watching local feeders. The weather was kind to us this year, and early snow cleared to give good visibility. We actually counted 1,241 birds of 29 species in total (+2 extra in count week). This is 2nd highest total species in the nine (9) years that this Val-des-Monts count has been conducted.

We had high counts for Black-capped chickadees (405), Red-breasted Nuthatches (58), Golden-crowned Kinglet (7), Northern Cardinal (11), and American Goldfinch (101). We also added a new species to the count, the Red Crossbill (12). It was a very low year for American Tree Sparrows, with a count of three (3).

A small group of counters met for lunch at Maison Melda Bistro, and it was really nice to put names to faces, especially with some new counters joining the team. Despite some late cancellations, including feeder counters we were 16 strong – a high count for volunteers this year! Many thanks to all who took part, both new and old. We look forward to seeing you all again next year – and are always happy to welcome anyone else who wants to take part.

The 2018 Christmas Bird Count corresponded with the open house at Nakkertok, and was organised by Deborah Doherty, with the support of Amy Lawes.

Fourteen (14) counters covered a total of 323km – by car, snowshoe, ski, and on foot. Feeder observations were also recorded. The general feeling from all participants seemed to be that bird activity was low, however 796 birds were counted, of 27 species in total (+two extra in count week (cw)). This is 3rd highest total species in the eight (8) years that this count has been conducted.

Below is a full list of all species seen in 2018, with total numbers. There were high counts for three (3) species: Evening Grosbeak: 14 (up from 2), Northern Cardinal: 4 (up from 1), and Downy Woodpecker: 18 (up from 16). However, it was a low year for Dark Eyed Juncos, with a count of 3,  the lowest in previous counts being 15. Also notably missing were American Tree Sparrows which have been seen on five (5) of the seven (7) previous counts.

For further details on the history of the count, to explore historical data from all counts, or to find details of other counts, please visit this link.