For almost 50 years, the Association has been testing surface water conditions once or twice a season for Escherichi Coli bacteria, commonly called E. coli. The results of the water quality testing for the past few years are included below.

E. coli is one of the most common species of coliform bacteria. It is a normal component of the large intestines in humans and other warm-blooded animals. It is found in human sewage in high numbers. E. coli is used as an indicator organism because it is easily cultured, and its presence in water in defined amounts indicates that sewage may be present. If sewage is present in water, other disease-causing bacteria may also be present. It is important to note that given the many factors and variables, results from one sample testing to another can vary significantly even at the same time in the same location. As such, these tests help us to monitor any changes or trends in the level of contaminants in the water over time.  So far, and including this recent round of testing, our levels remain fairly good, and stable. However, some long time readers might notice that some levels in typical trouble spots are higher this year.  This is likely due to the extended hot weather and increased algae and plant growth in the water.

So what causes higher levels and what does it mean? Heavy rain, spills, leaking septic systems and runoff from shorelines as well as bird and animal droppings are the most common factors that can affect bacteria levels. Acceptable levels for swimming and recreational activity are counts of less than 2.  When higher levels are indicated, you could be exposed to bacteria that may cause diarrhea or infections in your ears, nose, throat, eyes and skin. We do not test for drinking water standards which are less than 1.  Since all recreational waters are likely to contain some E.coli contaminants it is generally advised not to drink any lake water without an appropriate water treatment process in place.

New approach for Water Quality Testing as of Summer 2021

On March 19, 2021, the Federation of Lakes of Val-des-Monts advised the Association that the Municipality will now be conducting the water quality testing for the region’s lakes. You can read more about the approach that will be adopted by the Municipality in this document (VdM Water Testing March 2021 | VdM Analyses de l’eau Mars 2021). The Association plans to coordinate the volunteers for the Municipality’s water testing and to also continue our own specific water testing, as required.

The Association is always looking for volunteers to help with the sampling.  It only takes an hour or so and is a great way to get your kids more involved in water stewardship at the cottage!  If you’re interested please send us an email at lacmcgregorlake@gmail.com and we’ll contact you when we have dates for testing next year!

(Note: Results of the Federation of Lakes 2015 Water Quality Survey are posted below the maps at the bottom of this page.)

Following the adoption of the Water Management Master Plan on May 5, 2020, the Municipality of Val-des-Monts began monitoring water quality in May 2021. For the first phase of this program, 47 lakes were targeted. They were selected according to the anthropogenic forces to which they are subject. The bodies of water most likely to be subject to anthropogenic forces, for example residential development, the presence of roads and the proximity of agricultural land, were selected. In April 2021, the Municipality reached out to the lake associations and residents in order to call upon the many volunteers and enthusiasts interested in contributing to the program. The volunteers then followed a training session offered by the Municipality on the procedures governing the gathering of data, after which data collection for the 2021 season began in June.

The Municipality would like to thank all the volunteers who participated directly or indirectly in carrying out the data collection. Their great participation made it possible to carry out numerous follow-ups throughout the territory.

The water testing reports can be found in the Environnement et Urbanisme » Environnement » PDE – Suivi de la qualité de l’eau section at the following link. Note: The reports are currently only available in French. However, a Report summary in English as it concerns McGregor Lake has been added below. McGregor Lake is an integral part of the Blanche watershed. It ultimately empties into the Blanche River to the south. It is fed by several tributaries including Ruisseau Pélissier to the northwest, Lac Brassard to the north, Lac du Castor and Baie Mud to the east. Please keep in mind that the findings obtained are solely based on the data collected and represent only the situation at the time of the data collection. A continuous monitoring strategy will be required in order to establish a more assertive conclusion.

McGregor Lake has 5 monitoring stations, 3 of which are subject to physicochemical monitoring and present very similar results and generally reach the same trophic state. The first station, MG1, has an average summer transparency of 6.5 meters. This transparency characterizes very clear water and places the state of the lake in the Oligotrophic state. The average concentration of chlorophyll A is 6.5 µg/l, which indicates water with a high biomass of algae and microscopic plants in suspension. This parameter places the lake in the Meso-eutrophic transition zone. Lastly, the average concentration of total phosphorus measured is 2.0 µg/l, which indicates that the water is very poorly enriched in nutrients. This variable indicates that the body of water is in the Ultra-oligotrophic state.

The physicochemical variables of the MG1 station present discordant signals, but the trophic state of the lake is probably in the Oligotrophic zone.

The second station on McGregor Lake, MG2, presents results very similar to those obtained at the MG1 station. The average summer transparency is 6.3 meters, the chlorophyll A concentration is 4.6 µg/l and the average total phosphorus concentration is 2.7 µg/l, which means that the water is poorly enriched and that the trophic state is generally maintained in the Oligotrophic zone.

The physicochemical variables of the MG3 station give discordant signals, but the trophic state of the lake is probably located in the Oligo-mesotrophic transition zone or even in the Oligotrophic zone.

The two additional monitoring stations, namely MG4 and MG5, were subject only to water transparency readings and show results supporting the conclusions established above. Both stations have an average transparency of 5.7 meters characterizing the lake as Oligo-mesotrophic.

It is important to note that additional data and monitoring will be necessary in order to establish more precisely the trophic state of the lake. Additional data will aim to reduce the margin of error of the data presented in this report.

On July 28, 2021 volunteers sampled lake surface water at over 70 locations around McGregor lake. The locations were selected based on historical data, new developments, and creeks and streams that feed water into the lake.

This sampling and analysis regime is a snapshot of the health of the lake at a point in time with respect to E. Coli bacteria and can be affected by recent events such as runoff due to a recent rain, the presence of wild life including geese and beavers, or domestic animals.

Streams which have a very high ratio of shoreline to water, or shallow areas with slow moving water, generally show higher concentrations of bacteria due to some of the reasons mentioned earlier. Sampling at the outlet of a stream and then down the lake shore some distance provides some measure of how well the lake is able to manage the bacteria load from the stream.

The sampling conducted on July 28, 2021 was only one day after several days of wet weather and so should be considered as close to a worst case scenario, with the only worse case being sampling during or directly after a heavy rain storm with much more runoff water entering the lake. Given that the results indicate that there are only three or four readings that could be of concern for the nearby residents, this sampling indicates that the health of the lake is fairly good with respect to E. Coli. 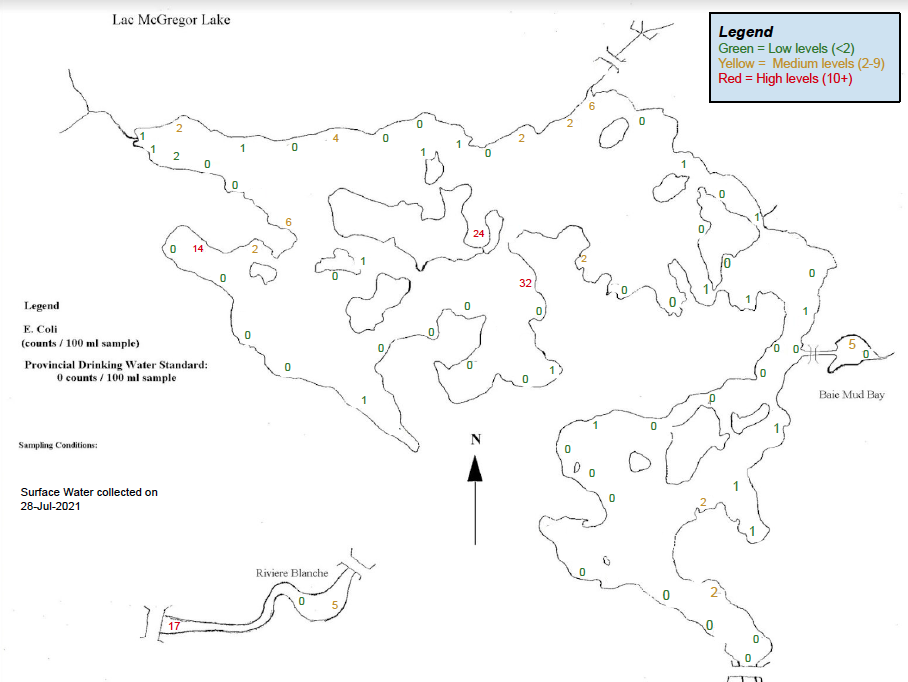 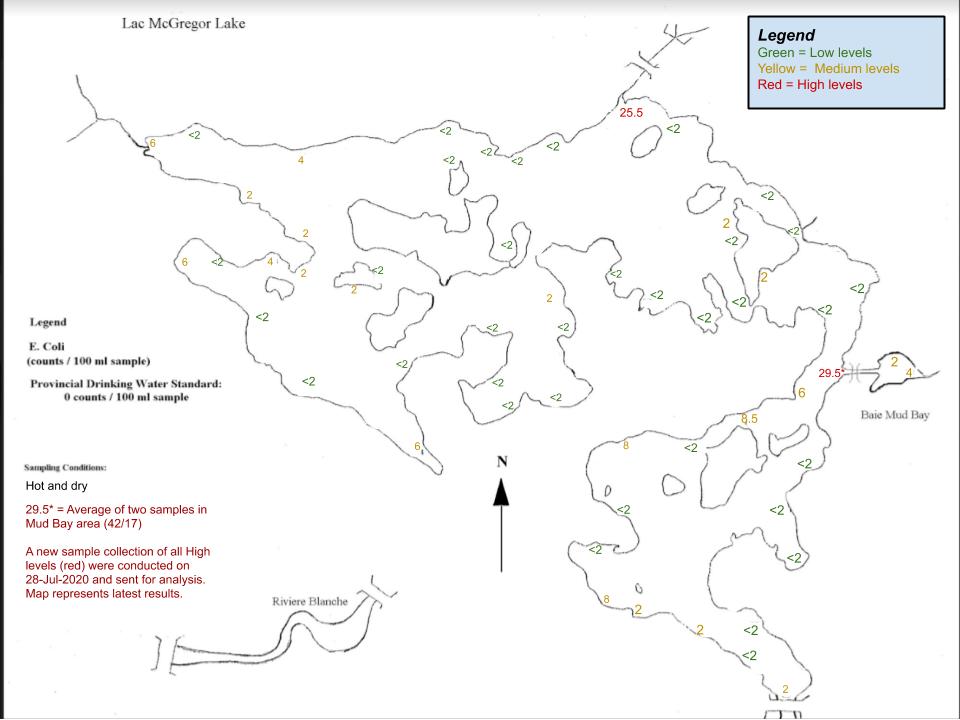 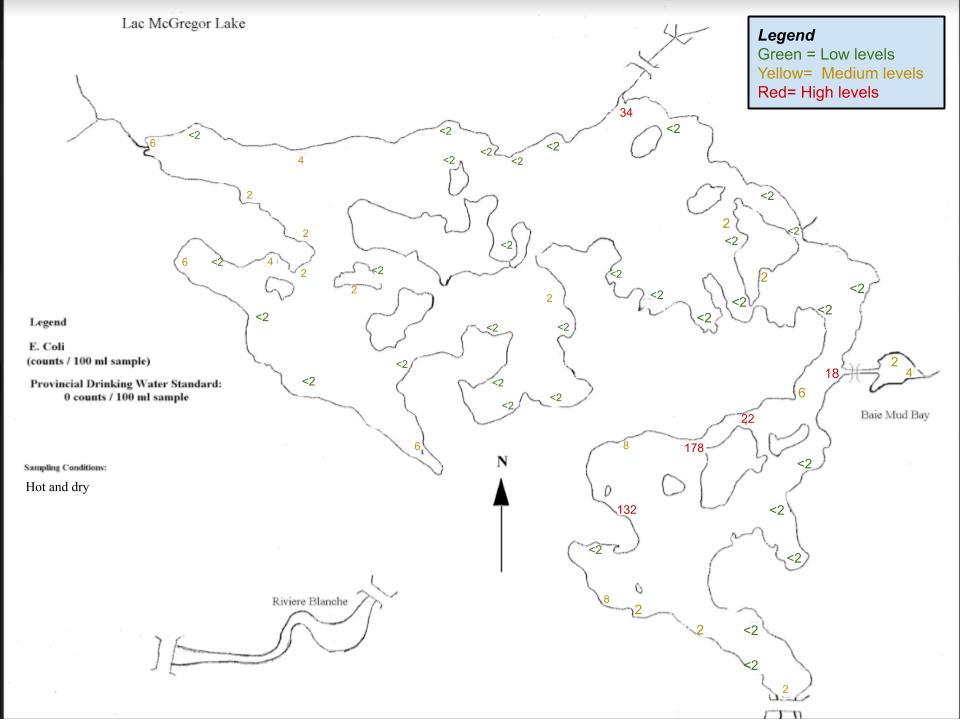 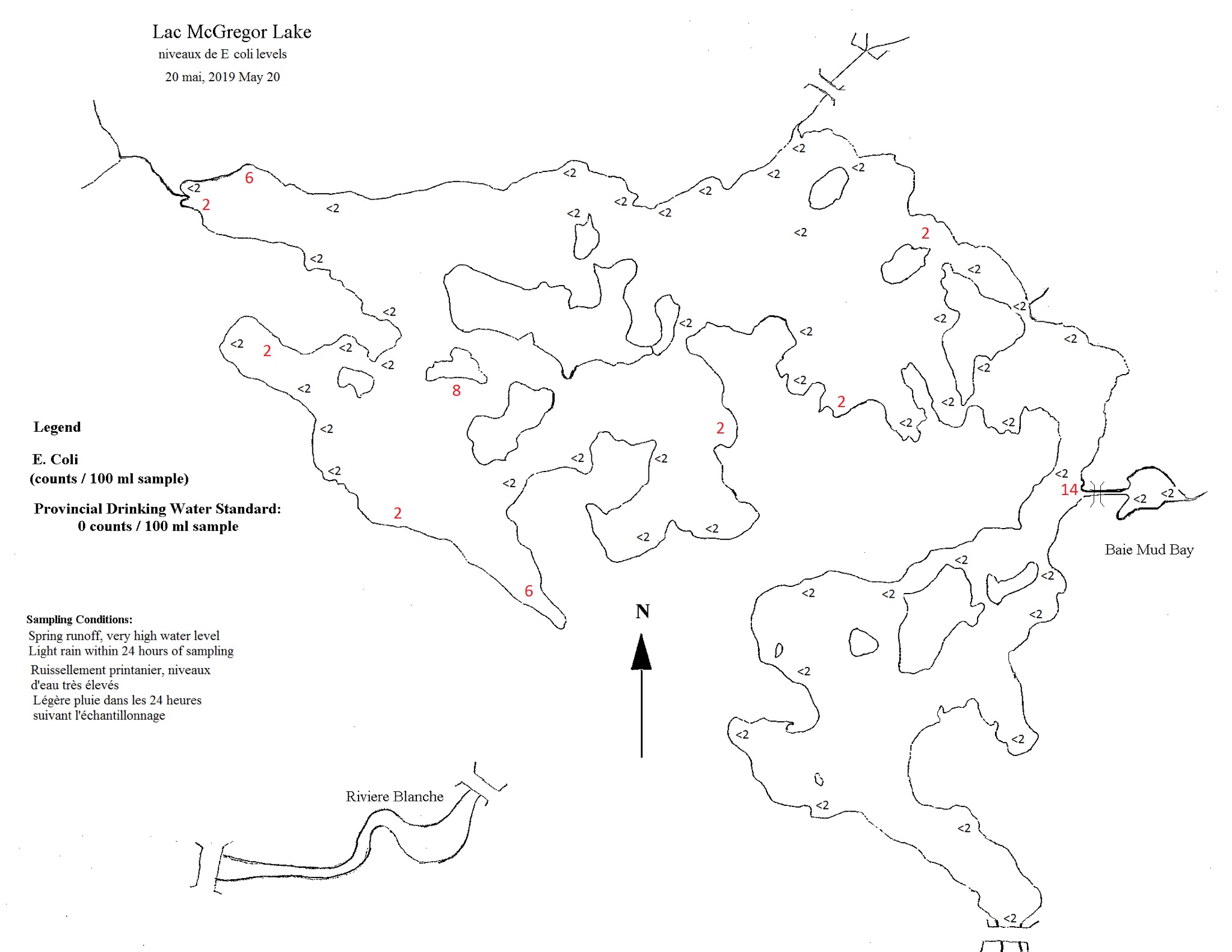 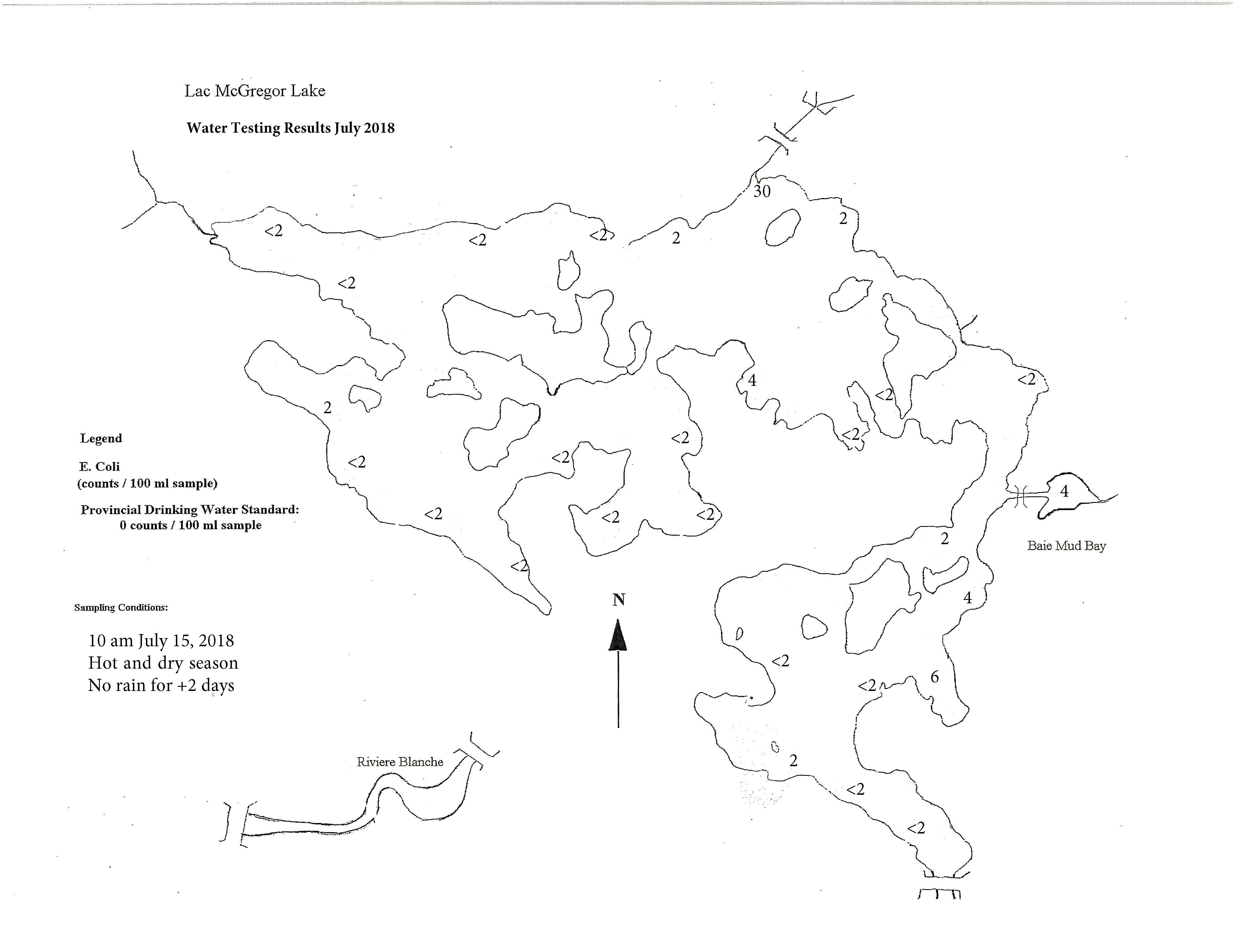 Federation of Lakes Survey of Waterfront owners of Val-des-Monts

In 2015, volunteers from 23 lake areas in Val-des-Monts took part in the État de vieillissement des lacs project. The goal was to gather water samples to register each lake’s phosphorous, dissolved-organic-carbon and chlorophyll levels three times over the summer (mid-June, mid-July, and mid-August). In addition, the volunteers evaluated the water transparency at each sampling. The overall results of the survey, which will help determine the trophic status or “age” of each lake, as well as which lakes need added care, are posted on the Federation of lakes website – Water Quality section. The report on McGregor Lake is available here (available in French only).