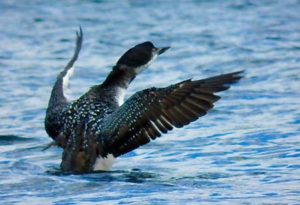 The Canadian Lakes Loon Survey was initiated in Ontario in 1981, and expanded nationally in 1989.

Human disturbance and development are ongoing threats to loons. Canadian Lakes Loon surveyors report many activities that are detrimental to loons including: disturbance of nesting sites (as a result of boats, canoes/kayaks, personal watercraft, and water level changes); entanglement in discarded debris (fishing lines and domestic garbage); nest predation due to attracting and support of nest predators (raccoons, skunks, and gulls); and displacement of loons through habitat loss. Reproductive success data from the Canadian Lakes Loon Survey clearly show that the number of chicks that each pair produces each year is declining over time.

Loon reproductive success is a sensitive indicator of the overall health of a lake, while signs of trouble from animals lower down on the food chain may be more subtle. Adult Common Loons typically return to the same lake year after year, so breeding pairs and their chicks feed almost exclusively on their nesting lake. Thus, declines in reproductive success on a particular lake are likely due to problems on that lake, and not from elsewhere (e.g., on wintering grounds or while migrating north in the spring). We know these things because of Bird Studies Canada’s Canadian Lakes Loon Survey (CLLS). CLLS participants have monitored Common Loon reproductive success each year since the early 1980s in Ontario, and nationally since the early 1990s. Participants also collected information on the number of breeding pairs on particular lakes, and what influences their reproductive success. Fortunately, Common Loons are easy to identify and fun to watch throughout the summer, making CLLS participation both easy and popular.
….. excerpt from Common Loon Reproductive Success in Canada by Dr. Doug Tozer

In addition, a report published by the National Audubon Society in the United States in 2014 indicates that loon recovery is threatened by climate change. You can read a summary of the report in the Ottawa Citizen article: “Climate change will disrupt hundreds of North American birds, study says“, published September 9, 2014.

Taking part in the Canadian Lakes Loon Survey (CLLS) is an excellent way to enjoy watching loons over the summer while contributing to loon research and conservation. To track loon chick survival through CLLS, you need to be at a lake in an area where loons breed at least three times over the summer:

– in June to watch for pairs of loons occupying the lake

– in July to look for newly-hatched chicks

Each participant is provided with a survey kit and detailed instructions that explain the survey protocol.

All participants receive a paper kit by mail in mid-May (up to mid summer for late registrants), that can be submitted by mail or online by 15 September.

The CLLS is a project of Bird Studies Canada (BSC), a non-government, not-for-profit organization. Participants are asked to join as members of BSC. A tax-receiptable membership fee of $35.00 helps to offset the costs of the survey, and includes all membership benefits such as quarterly issues of BSC’s publication, BirdWatch Canada.

Note: The information shared here is primarily taken from the Birds Canada Studies website. For more information on how to participate in the annual Canadian Lakes Loon Survey, please visit their website here.

Ms Hania Grabowski is the current McGregor Lake Loon count coordinator. If you’d like to participate in the annual loon count, which takes place usually twice during the summer, in June/July and August, please get in touch with Hania via lacmcgregorlake@gmail.com.

We had a perfect day for the first loon watch on July 2, 2022. Lots of sunshine, a little wind and not too cold or too hot.

Sightings of 5 adult loons were confirmed.

Thanks to all for your enthusiasm and loon centred dedication!!!

The Loony Regatta included Bill Leslie and Mary Carman, John Freeth and Marilyn Albert and Bill Metz and Elizabeth Friesen, all meeting at the big Bay for coffee and laughs.

Special thanks to Oonagh Fitzgerald and Karl Biernath as well as Amy Jane Lawes and Paul, for providing dedicated backup if needed! 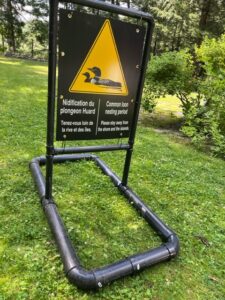 Not loons, but always nice to observe, were sightings of the great blue heron in Mud Baie , a gorgeous bald eagle flying on the northside of Ile Noire, a large black vulture-like bird in Baie McArthur, possibly a cormorant and 16 Merganzer ducklings in baie Courville on June 30.

Please proceed at very low speeds (no wake) when power-boating in sensitive areas or within 30 meters of the shoreline.

The second Loon Watch of 2022 was held on Sunday, August 14, 2022 starting at 9 AM. The paddlers in our group were delighted with the tranquil waters, little wind and a very calm, sunny and warm morning.

Our lake was like glass; perfect for kayaking. It also made it much easier to spot the loons as we looked in all the nooks and crannies of McGregor Lake.

Volunteers sighted a total of 9 adult loons and one immature loon. The sightings were spread out all over our lake:

After the Loon Watch, some participants enjoyed a wonderful “Looney Regatta” in the middle of the big bay, a lovely gathering celebrated by the participants of two pontoon boats and three kayaks.

Although not part of the Loon Watch, our intrepid Loon Watchers also observed lots of other beautiful birds on the lake: A Great Blue Heron in Mud Baie, a mature Bald Eagle near Ile Noire, an immature Bald Eagle and a rare sighting of Cape May Warblers and of course Mallard duck slinkies in the shallows.

The first Loon Watch of 2021 was held on Saturday, July 3rd at 9:00 am. The team of volunteers enjoyed a beautiful, sunny, albeit cool morning. The earlier start time and the cool weather resulted in fewer boats on the lake during the Loon Watch.

A total of 7 adult loons were sighted:

And a special note: Most of the volunteers also observed an abundant bird life on the lake, with lots of Canada Geese and goslings and some Mergansers with chicks.

Thank you everyone for your active and joyful participation, & pictures. 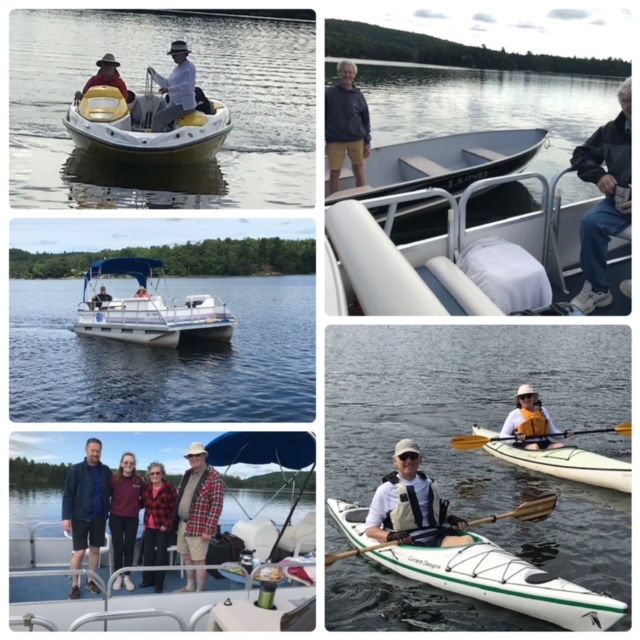 The second Loon Watch of the year was held Friday, August 27, at 9:00 am. It was a beautiful, sunny but fairly windy day. Given that the water was quite choppy, the volunteers believed that some loons, particularly the smaller loons, stayed hidden in the shallow, quieter water.

A total of six adult loons were sighted:

After the Loon Watch, some participants enjoyed a wonderful “Looney Regatta” in the middle of the big bay, a small but lovely gathering celebrated by participants of two vessels.

And a special note: The day after the Loon Watch, Jean-Marc Pellerin observed four loons in front of his window (apparently, with a big sign saying “Here we are…count us in…we were on holidays but came back!”). And it was further observed that there may be a nest with two young loons near the big bay.

Thank you everyone for your active and joyful participation! And big thanks to Sylvie Halde & Sylvie Gravel for sending us these photos. 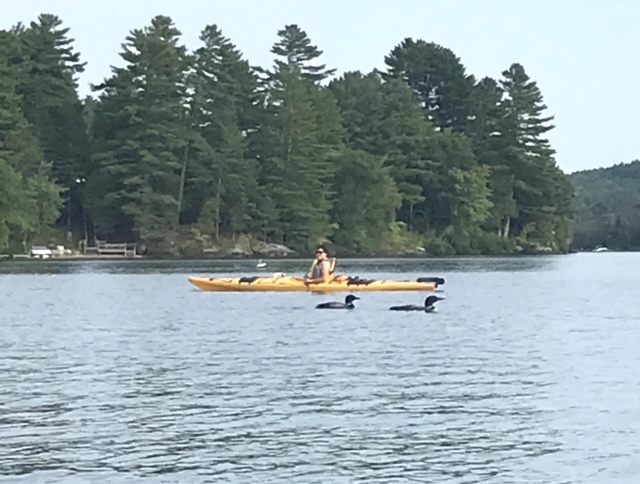 On July 18, 2020, a sunny and warm Saturday, the first count of McGregor Lake’s Loon Watch was held.

A count earlier in the spring wasn’t held due to Covid concerns, however, with this July count and another later in August we will have sufficient information to report our annual findings to Birds Studies Canada Canadian Lakes Loon Survey as we have for several years.

The count included eight (8) Adult Loons and one (1) baby loon. This single young had first been sighted on July 8th near Île Cornu and had already significantly increased in size. Sightings were otherwise of single loons, scattered around the lake in areas such as Île Bankhead, Baie McCarthy, Baie Gunville, Baie Zurenski and Millionaires Bay.

After the Loon Watch, we enjoyed a wonderful “Looney Regatta” in the middle of the big bay, celebrated with lots of laughter and comradery by participants in five vessels.

Of course, the loons must had known we are counting because the very next morning one volunteer reported a ‘loon party’ of 6!

Thanks to all participants and in particular to our coordinator Hania Grabowski.

The second Loon Watch of 2020 was held on a warm and sunny August 22nd. The earlier forecasts had threatened rain for most of the week, so a warm sunny day was a real gift. The volunteers included: Bill and Liz Metz, Mary Carman and Bill Leslie, Amy Jane Lawes and Paul, Nadia and Mike Hall, John Freeth and Marilyn Albert, Sylvie Halde, Deborah Doherty and Allan, Jean Marc Pellerin, Russell Williams and your Loon Watch Coordinator, Hania Grabowski and Rick Mundell. Absent with best wishes were David and Pennie Younger and Sylvie Gravel and Denis Dessureault.

A total of 13 Loons were spotted, all adults. Sightings included:

A big thank you to all our dedicated volunteers! And a special thanks to all those participating in the Loon Watch by kayak, which provided lots of exercise, particularly for Sylvie Halde who participated by kayak despite a broken leg! Now that’s dedication!

As per tradition, the volunteers gathered for the Looney Regatta get-together after the Loon Watch , in the middle of the big Bay. 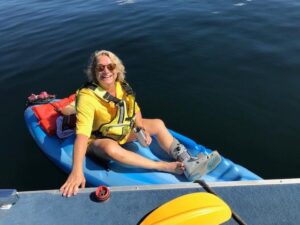 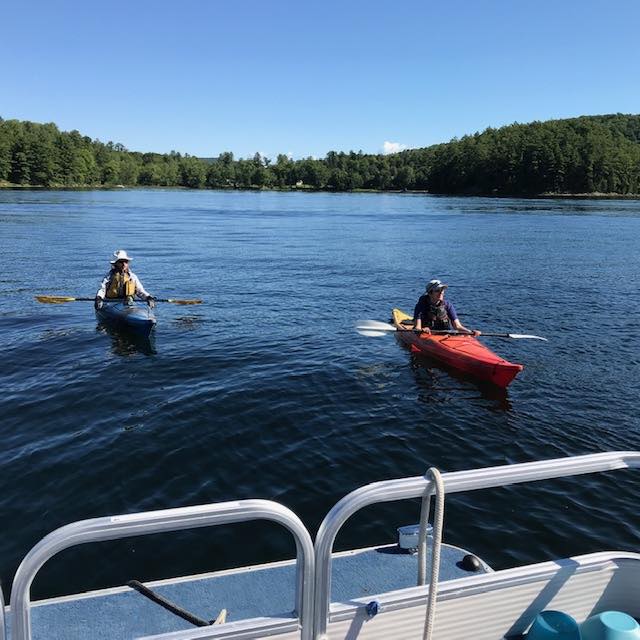 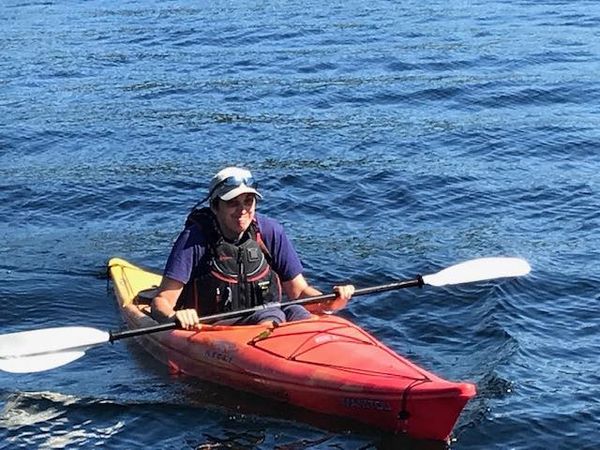 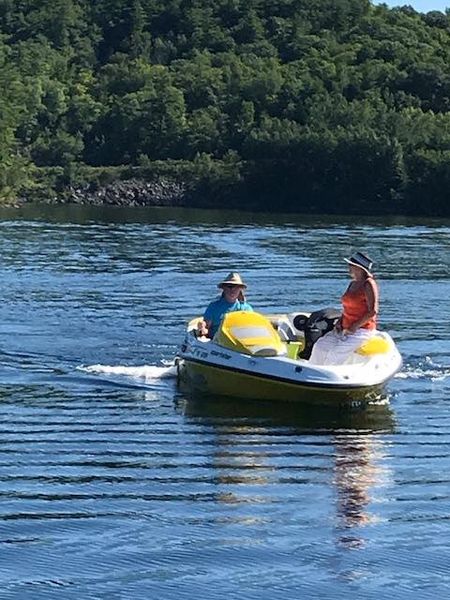 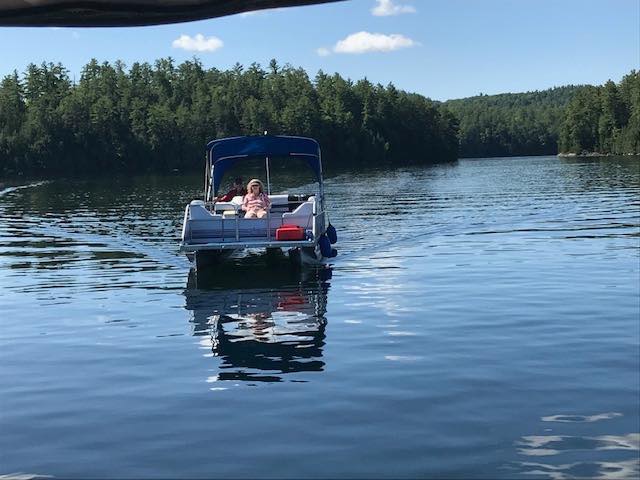 The first Loon Count of 2019 took place on the morning of Saturday June 22, 2019.
All 10 zones of the lake (see map) were surveyed, with a total of seven (7) adult loons spotted, including two loon pairs, as follows:

Despite the tough spring conditions (spring flooding, high water levels, cold & wet spring), one nest was observed with two eggs in it! We’ll be keeping an eye out to see how those chicks fare in the coming months. The next Loon Count is currently scheduled for August 17. Stay tuned for more updates. 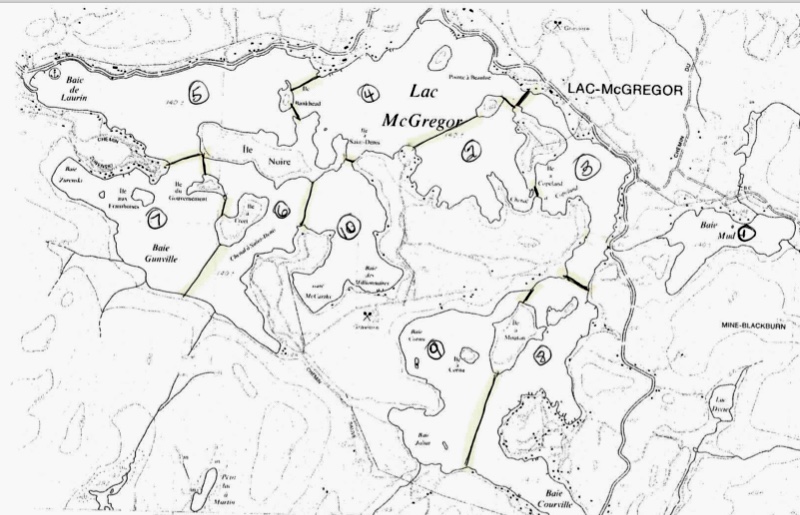 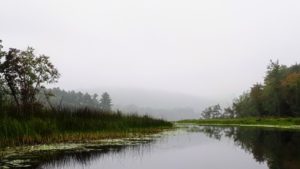 The second loon count took place on the misty morning of August 17, 2019. The Loon Watch participants had to dodge rain clouds as they conducted the second survey which resulted in  sightings of 12 loons in total, including 11 adults and one teen loon. A very healthy population for McGregor lake! 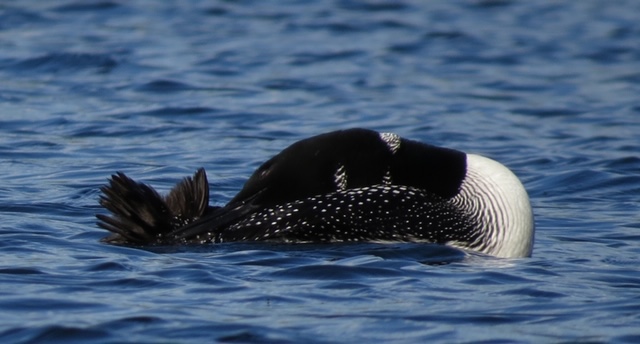 The first loon watch of 2018 was held on June 16, 2018. Six (6) adult loons were observed on McGregor Lake.  At the second loon watch that was held on August 11, 2018, seven (7) adult loons were observed. Sadly, there were no loon chicks this year. This may be due to several factors, including: the May ice storm during the nesting period, the early and persistent hot weather, aggressive wave action too close to our shorelines or the presence of Canada Geese who are can be very territorial. Big thanks to our participants: Amy Lawes, Bill Metz, Mary Carman, Jean-Marc Pellerin, Hania Grabowski, and David Younger.

Loon watches were conducted on one morning in July and one morning in August 2014. In July, five (5) adults and two (2) chicks, were observed; and in August, eight (8) adults and the same two (2) chicks were observed. Participants in the surveys were Hania Grabowski and Rick Mundell, Mary Carman, Bill Metz, John Freeth and Marilyn Albert, Carol Bradley, Jean-Marc Pellerin and David Younger.